The Big 4: Live from Sofia, Bulgaria features live concert performances by Metallica, Slayer, Megadeth, and Anthrax, collectively known as "The Big Four" of thrash metal. The event took place on June 22, 2010, at the Sonisphere Festival at Vasil Levski National Stadium, Sofia, Bulgaria. Before its DVD release, it was shown at 450 movie theaters in the United States and over 350 movie theaters across Europe, Canada, and Latin America on June 22, 2010. The DVD peaked at number one on the United States, United Kingdom, Austrian, and Canadian charts, and also charted on three other charts. It was certified gold in Germany and provided Slayer with its first platinum certification.

On Wednesday, June 16, 2010, at the Sonisphere Festival at Bemowo Airport in Warsaw, Poland, the "big four"- Metallica, Slayer, Megadeth, and Anthrax performed together for the first time. The members of the four bands (except for Slayer's Jeff Hanneman) were first photographed together on the previous day. Their live concert, on June 22, was for one night only. Directed by Nick Wickham, the event was filmed and transmitted via satellite to over 450 movie theaters in the United States and over 350 movie theaters across Europe, Canada, and Latin America. Tickets were made available for around $20 at TheBigFourLive.com, which also listed the theaters where the concert was being screened. Delayed screenings took place in Australia, South Africa, and New Zealand. The film's contents and artwork were revealed on August 25, 2010. A limited-edition guitar pick was unveiled a day after the artwork was revealed. The European release was initially scheduled for October 11, but Metallica later announced on their official site that the European release would be pushed back to October 15, with an International release on October 18, and a North American release on October 19, 2010. On September 15, it was announced that a "super deluxe" limited edition box set would be released on the same date as the regular edition, and a 36-second video preview of the box set was released on September 17. In mid-September, publication was postponed further to a European release on October 29, an International release on November 1, and a North American release on November 2, 2010. Four teaser clips from the video were released on October 12, and nine days later, Metallica's performance of "Sad But True", taken from the film, was released. A three-and-a-half-minute trailer was released on September 21, 2010. 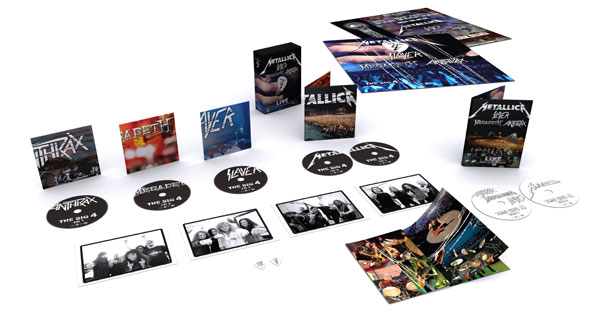 Retrieved from "https://metallica.fandom.com/wiki/The_Big_4:_Live_from_Sofia,_Bulgaria_(video)?oldid=18451"
Community content is available under CC-BY-SA unless otherwise noted.